Each of the five children of the Klutz family were involved in mishaps on Halloween keeping both their parents and the local ER busy.  Assign ICD-10-CM diagnosis and external cause codes for each of their injuries. 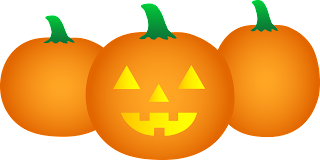 Egon, the oldest child, kicked off the parade to the ER.  He’d begun trick or treating, and he and his bag of candy went flying onto the cement, when he fell from his skateboard after colliding with a bicyclist on the sidewalk.  Since he had suffered about 30 seconds loss of consciousness, his parents decided to take him to the ER.  The ER doctor examined him for fractures, but concluded Egon had a concussion.

Just as they returned to their single-family two-story brick home, Peter, the middle child, ran home from the next-door neighbor’s trailer holding his left arm, which was bleeding.  He told his parents that he’d been playing in the neighbor’s backyard with their pet goat, when inexplicably, without provocation, the goat bite his left forearm and elbow.  Mr. Klutz put Peter in the car and made a return trip to the ER where the lacerations from the goat bites were cleaned and closed with a few stitches.

Turns out that it was a good thing Mrs. Klutz was at home with Egon since, as no sooner had Mr. Klutz left with Peter, than she got a call that her oldest daughter, Janine, had fallen off a pile of haystacks she’d been climbing in Mr. McGillicuddy’s barn where a Halloween party was being held.  Mrs. Klutz texted Mr. Klutz who was still in the ER with Peter that he should be expecting Janine to arrive shortly.  Upon examination in the ER, Janine was determined to have a Colles fracture of her right wrist.  She was splinted and both she and Peter left with their dad to return home.

Meanwhile, young Raymond was running through the family’s kitchen with a sheet over his head pretending to be a ghost.  He tripped over the dog who was lying in the middle of the kitchen, and immediately began crying.  Mrs. Klutz took one look at the little finger of his left hand, which was bent at an awkward angle, and packed him, Egon, and Dana into the car for yet another ER visit.  They passed Mr. Klutz, Peter, and Janine coming home as they went along the way.  Once at the ER, the doctor performed a reduction of the PIP joint dislocation, splinted the finger, and sent Raymond home.

The nursing staff had given little Dana a lollipop while she was standing in the corridor with her mother waiting for Raymond to be discharged.  At some point, she had pulled the sugary treat off the stick and swallowed it, but she immediately began choking, the lollipop having become stuck in her esophagus.  A quick thinking resident performed a Heimlich maneuver on her, and Dana coughed up the lollipop.  By this time, Raymond was discharged, and Mrs. Klutz took Raymond and Dana back home.  Thus ending the Halloween Mishaps for the Klutz family……at least for this year!

Per AHIMA, the recertification timeline cycle changes and new CEU domains that were previously published to become effective on November 1, 2018 have been delayed by the Certification Department at AHIMA to ensure strategic alignment and an effective, error-free implementation. The previously published information was approved by the Commission on Certification of Health Informatics and Information Management (CCHIIM) and allowed for an individual to report in the CEU Center (starting on 11/1/2018) using either the new domains or under the existing domains until 12/31/2019. The revised plan will be to use only the new domains starting on 1/1/2020.  For more information, see the AHIMA website.

A Day in the Life of OHIMA’s Executive Director: Part 1

I have had writing this article on my to-do list for quite some time.  Long to-do lists that grow and never shrink are just part of the life of an Executive Director.  Working for a small non-profit, there is always more to do and never enough time.

Many people – inside and outside the association – are curious about my work as the Executive Director of the Ohio Health Information Management Association.  My sister commented once that she had no idea what an Executive Director actually did.  She just knew that I was on my computer all the time.  She’s a nurse.  And all nurses who function as a nurse – regardless of in what setting they work – do basically the same general things.  They are a vital part of direct patient care and planning that care, they act as a patient advocate, and provide patient education and support.

Along those same lines … all associations – regardless of industry – do the same basic things.  And there is an association for everything.  There are associations for nurses.  For podiatrists.  For the professionals who do snow removal.  For truck drivers.  And of course, Health Information Management professionals.

I came from the HIM industry (rather than from another association).  I used to travel around the nation implementing Electronic Medical Records in radiology practices.  Loved the work.  Traveled all week every week for about 3 years.  It is said that people who travel full-time will burn out after about 2-3 years.  And boy was that true!  Right about when I hit 3 years of traveling, I never wanted to see the inside of another hotel room.  Ever.  Again.  And still … 7+ years later.  I STILL don’t care for traveling – even for vacations – because of those 3 years of living out of a hotel.  Maybe one day, I will enjoy travel again.  But for now, I love sleeping in my own bed every night.  While I was traveling and working as an HIM professional implementing EMRs, I never dreamed that working on the association side of HIM would be in my future.  But it was!

I soon found that being an HIM professional and being an association executive are two very different things.  When I became the Executive Director of OHIMA, I had to learn how to be an association executive.  And I learned quickly that all associations – regardless of industry do the same basic 5 things:
My life as Executive Director centers around these 5 tasks.  And no two days are the same.  Depending on the time of year, the OHIMA Central Office focuses on different projects.  In the winter, we spend much of our time prepping for the Annual Meeting and Trade Show (it takes many checklists and timelines with hundreds of line items to make our big conference happen and run smoothly!).  In June, we are working with the Board of Directors to prepare strategies and the budget for the new fiscal year beginning July 1st.  In the autumn, we have several events including the Fall Coding Seminar, HIM Advocacy Day at the Statehouse, the national AHIMA Convention, and more.  We stay very busy here!

The next article in this “Day in the Life” series will highlight a few days in my work life.  And later in another article, you will meet some of our other staff members in the OHIMA Central Office!  Together with our great staff and volunteers, we make it all happen. 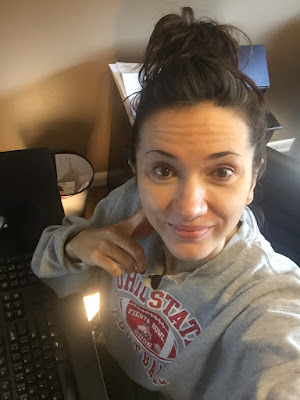 This is me working in my home office.
Without any makeup on.
(I can’t believe I am posting this!)
But this is what I look like most days.

If you want to write a “Day in the Life” article about your HIM job...
contact me at ohima@ohima.org!  I’d love to help you write it!

Let’s begin with a review of the Official Coding Guidelines in an effort to gain clarity.  Section II.H (Selection of Principal Diagnosis; Uncertain Diagnosis) as well as Section III.C. (Reporting Additional Diagnoses; Uncertain Diagnosis) address uncertain diagnosis code assignment.  An important piece of information to focus on here is that these guidelines only apply to inpatient admissions to certain facilities: short-term acute care, long-term care, and psychiatric hospitals to be specific.  This is our first clue that there is going to be a difference in how uncertain diagnoses are addressed based on inpatient or outpatient status.  By reviewing the guideline at Section IV.H. (Diagnostic Coding and Reporting Guidelines for Outpatient Services; Uncertain Diagnosis), we can see that coders are instructed not to code any term that indicates uncertainty.  Instead, coders are directed to code to the highest degree of certainty which could be a sign, symptom, or abnormal test result.

Returning to the guideline at Section III.C., it goes on to state that uncertain diagnoses documented as such at the time of discharge should be coded as if they exist.  The rationale for assigning these codes is that diagnostic and possibly therapeutic services have been provided with potential need for additional workup or observation.  In the 4th Qtr. 2017 Coding Clinic, clarification was provided stating that even though a condition may have been worked up and/or received treatment, if at discharge it had been ruled out, it should not be coded.  The term “ruled out” means that the diagnosis has been eliminated and is no longer uncertain.  The focus is on the status at the time of discharge.

The terms that are listed as indicating uncertainty include the following:

This list is not exhaustive as the guideline says “or other similar terms”.  This has created some confusion among coders as they try to determine what constitutes an uncertain diagnostic statement.  Additionally, if Section IV.H. is reviewed again, the term “working diagnosis” is listed as one that correlates with uncertainty.

1st Qtr. 2012 Coding Clinic puts the coding of “borderline” diagnoses outside the “uncertain” category.  A diagnosis characterized as “borderline” should be coded as if it has been confirmed.  If there is a specific Index entry under “Borderline”, such as for hypertension (R03.0), then that code should be assigned.  If the borderline condition is not indexed under “Borderline”, then code the condition as if it exists; for example, borderline osteoporosis would be coded to osteoporosis (M81.0).

One further point of clarification from the 1st Qtr. 2014 Coding Clinic is that the phrase “evidence of” is not considered uncertain.  Therefore, it would be appropriate to assign code C78.7 (secondary malignancy of the liver) from the description “evidence of liver metastasis” in the outpatient setting.

Now you are in the kNOW!!

Dianna Foley, RHIA, CHPS, CCS  is OHIMA's Coding Education Coordinator. Dianna has been an HIM professional for 20 years. She progressed through the ranks of coder, department supervisor, and department director, to her current role as a coding consultant.
She recently served as the program director for Medical Coding and HIT at Eastern Gateway Community College. Dianna earned her bachelor's degree from the University of Cincinnati subsequently achieving her RHIA, CHPS, and CCS certifications. She is an AHIMA Approved ICD-10-CM/PCS Trainer and a a presenter at regional HIM meetings and the OHIMA Annual Meeting.
By OHIMA at October 09, 2018 No comments:

Match That External Cause Game 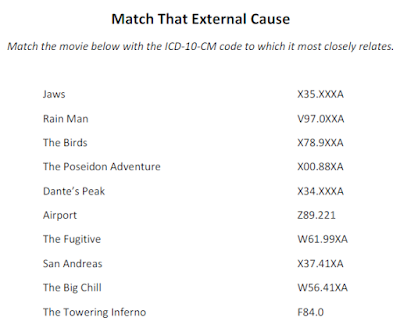