“In the kNOW” for this month will be looking at ICD-10-PCS coding for an associating liver partition and portal vein ligation for staged hepatectomy procedure (ALPPS).  This is a two-stage procedure used in the treatment of liver cancer.

This procedure focuses on the regenerative property of the liver which is the only organ that regenerates.  The goal is to separate healthy liver tissue from that containing the cancer, and giving the future liver remnant (FLR) the opportunity to enlarge.  This is necessary so that the remaining portion of the liver is sufficient to perform the liver functions and prevent post-hepatic failure.  Once the hypertrophy of the FLR occurs after a week or two, then the diseased part of the liver is removed.

Let’s examine how this procedure is performed and coded. 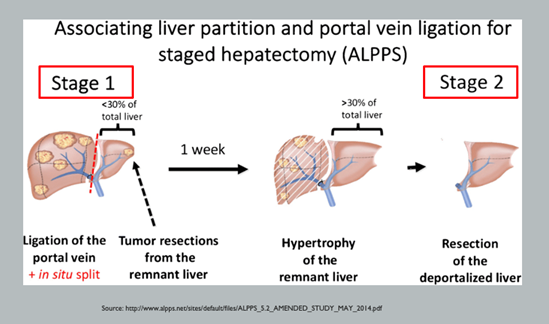 If the above-described procedure was performed with an open approach, the correct coding would be:

In the second stage of the procedure, once it’s been determined that there has been sufficient hypertrophy of the liver remnant, the diseased portion of the liver is removed, again an open approach.

Dianna Foley, RHIA, CHPS, CCS, CDIP  is OHIMA's Coding Education Coordinator. Dianna has been an HIM professional for 20 years. She progressed through the ranks of coder, department supervisor, and department director, to her current role as a coding consultant.
She recently served as the program director for Medical Coding and HIT at Eastern Gateway Community College. Dianna earned her bachelor's degree from the University of Cincinnati subsequently achieving her RHIA, CHPS, and CCS certifications. She is an AHIMA Approved ICD-10-CM/PCS Trainer and a a presenter at regional HIM meetings and the OHIMA Annual Meeting.
By OHIMA at April 25, 2022