“Spotlight on CPT” this month is focusing on CPT codes for orchiopexy. Revisiting medical terminology provides information on the meaning of orchiopexy.  Orchio is a prefix meaning the testes, and pexy is a suffix meaning surgical fixation.  An orchiopexy procedure is performed for one of two reasons.  Often, the patient has an undescended testicle which needs to be relocated into the scrotum.  The other condition that is treated with orchiopexy is testicular torsion.  Let’s look at these procedures in more detail.

When a patient has an undescended testicle, the physician will make an incision overlying the testicle, which is often inguinal but can be intra-abdominal.  The approach is the key to assigning the correct CPT code since orchiopexy can be done via an inguinal or scrotal approach (54640), or via an abdominal approach (54650).  There is also an option to code for laparoscopic orchiopexy for an intra-abdominal testis (54692).  Once the testis has been freed, it is then pulled down into the scrotum and secured so that it will not retract.  An important point to remember with CPT code 54640 is that in the past this code also covered any inguinal hernia repair that was done at the same time.  With the 2020 CPT code revisions, that part of the code description was dropped and now there is a note that if inguinal hernia repair is performed along with an inguinal orchiopexy, then the appropriate hernia repair code from the range 49495-49525 should be coded as well. 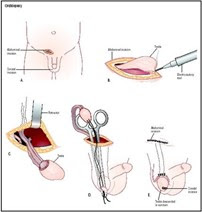 Testicular torsion is a condition where the testicle actually twists and produces a constriction in the spermatic cord.  Pain and swelling are signs of testicular torsion which is considered an emergency often requiring surgical intervention.  In this procedure, the testicle undergoes detorsion and then is secured to prevent future movement.  In some cases, during the procedure, a physician may also perform an orchiopexy on the contralateral testis as a prophylactic measure.  CPT code 54600 is assigned when testicular torsion is reduced and includes the contralateral side if performed.

Now, light has been shed on coding orchiopexy.

Dianna Foley, RHIA, CHPS, CCS  is OHIMA's Coding Education Coordinator. Dianna has been an HIM professional for 20 years. She progressed through the ranks of coder, department supervisor, and department director, to her current role as a coding consultant.
She recently served as the program director for Medical Coding and HIT at Eastern Gateway Community College. Dianna earned her bachelor's degree from the University of Cincinnati subsequently achieving her RHIA, CHPS, and CCS certifications. She is an AHIMA Approved ICD-10-CM/PCS Trainer and a a presenter at regional HIM meetings and the OHIMA Annual Meeting.
By OHIMA at March 08, 2021