Christmas for the Klutz family began like every other holiday-with a trip to the local ER.  A cascade of catastrophes had all the Klutz children packed into the car for the trip.  The calamities began with little Dana, who was so excited for Christmas morning, that while she was running to go downstairs, tripped over the carpet at the top of the steps, and went sprawling down them.  The clamor of the fall and his sister’s subsequent wailing roused Raymond, who was in his bedroom, from sleep.  Upon realizing it was Christmas morning, he started jumping on the bed in joy, tumbled off, hitting his chin on the nightstand.  Peter, who was in the shower, slipped in his hurry to see what all the commotion was about and struck his forehead on the faucet.  Egon, who was on the stepladder in the living room putting the Elf on a Shelf on an upper branch of the Christmas tree, was so startled by the hubbub that he lost his balance, and fell straight into the tree.  Janine, who was walking Peter to the car, slipped on the icy front porch steps hitting the back of her head on the cement sidewalk.

The ER staff, who knew the children by name, took each one to a bed and began examinations.  It turned out that little Dana had a broken nose.  Raymond had a nondisplaced, left mandibular body fracture.  A contusion of the forehead was the final diagnosis for Peter.  Egon suffered from multiple abrasions to the cheeks, nose, forehead, and chin.  Janine’s scalp laceration needed two sutures.

Once all the children had been treated and discharged, the Klutz family returned to their lovely single-family home.  The children were sequestered to the couch (an action their parents hoped would prevent any further ER visits), and gifts were opened with no further injuries…at least for this day!

HIM professionals have so many options when it comes to career choice!  Find some of those options in the Word Search below.  Click HERE to print the word search.  Click HERE for the answers. 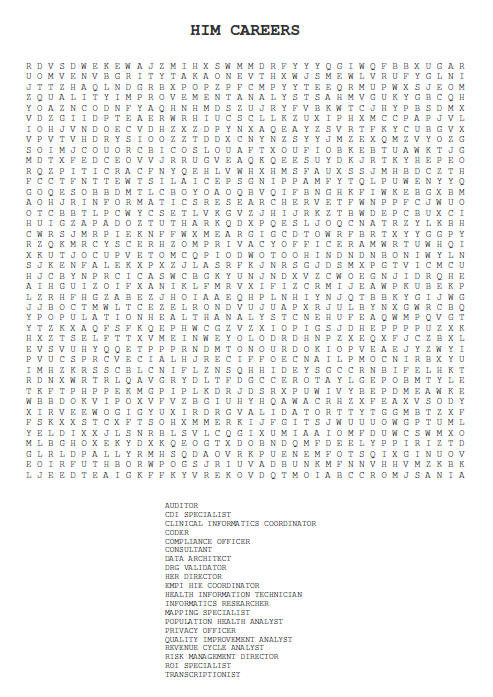 2) Hospital revenue growth slowed during the period because demand went down for key hospital services, like surgery and inpatient admissions, Navigant explained. More services are being performed in the outpatient setting migrating away from more costly inpatient setting.

3) Continued reduction in Medicare updates from ACA and the sequester- as a result hospital losses in treating Medicare patients rose from $20.1 billion in 2010 to $48.8 billion in 2016, according to American Hospital Association analyses,”

Word to the wise for CDI with less inpatient admissions, we must capitalize upon the value proposition we bring to the table, focusing on the return we bring to the organization in light of the expenses in running a program. This requires partnering with case management, utilization review and our physician advisors to improve the communication of patient care beyond present models with focus upon gross patient revenue versus net patient revenue. Aside from reimbursement, we must not forget our duty to the patient given that quality of care directly correlates with quality of documentation and communication.With expenses continuing to increase trailing revenue increases and more services moving to the outpatient setting, the creation of a perfect storm where CDI must rethink its current model and develop a strategic initiative to drive CDI operational excellence and value should be a top priority. Business as usual is simply not an option, there is just no substitute for a CDI cultural change moving ahead, recognizing that operating in a silo is counterproductive and counter-intuitive approach to affecting positive improvement in documentation quality.

Glenn Krauss is a longtime Revenue Cycle Professional with progressive hands one experience in all facets of the revenue cycle. He possesses a high energy level and passion for clinical documentation improvement initiatives that drive physician engagement in truly wanting to learn and acquire best practice standards of clinical documentation supporting communication of patient care.  He is the creator and founder of Core-CDI.com.