The previous installment of “In the kNOW”  presented information on hernia diagnosis coding.  Now our attention is going to turn to appropriately hernia repairs.  Let’s start with a basic piece of information which has been provided in Coding Clinic which states that when a hernia is manually reduced it is not separately reported.  So no code assigned for a manual hernia reduction.

Inguinal hernia repairs have similar determinations that must be made:  Open or Percutaneous endoscopic approach; Repair or Supplement root operation.  If it is a Supplement, what type of material: autologous, non-autologous, or synthetic substitute?  A coding professional will also have to distinguish whether the procedure was done on the left side, right side, or bilaterally.

Inguinal hernia repaired via an open approach with mesh = 0YU60JZ

Inguinal hernia repaired via an open approach without supplement = 0YQ60ZZ

Parastomal hernias are a type of incisional hernia occurring at the site of an ostomy.  These can be repaired either with an open or laparoscopic approach.

Internal hernias are seen in patients who have undergone bariatric surgery.  Those who have bariatric procedures performed laparoscopically have a greater incidence of internal hernias often located in Petersen’s space.  That is an area between the mesentery and the transverse colon.  The primary consideration regarding this type of hernia repair is whether it was done with an open or laparoscopic approach.  It is important to keep in mind that the hernia defect is in the mesentery so that is the correct body part that should be coded.

In ICD-10-PCS, incisional, ventral, and umbilical hernia repairs are all coded to repair of the abdominal wall.  Approach and root operation determinations are critical to assigning the correct code for these repairs as with the others we have already discussed.

Occasionally, for patients who have already had an incisional hernia repair, a second repair becomes necessary.  A surgeon may perform an abdominal component release.  This procedure separates the layers of the abdomen (components) in order to primarily close the hernia.  This is done with what are called relaxing incisions, which effectively free the abdominal muscle making that the body part for the root operation Release.  It is not uncommon to see the use of mesh in this procedure as the now single layer abdominal area will be weakened.

Questions have arisen regarding the appropriateness of assigning an additional code(s) for lysis of adhesions during hernia surgery.  The official advice provided indicates that should the lysis of adhesions go beyond what must be done to get to the operative site then the lysis can be separately coded.  Apply the root operation Release and assign the code(s) for the body part that is freed.

Dianna Foley, RHIA, CHPS, CCS  is OHIMA's Coding Education Coordinator. Dianna has been an HIM professional for 20 years. She progressed through the ranks of coder, department supervisor, and department director, to her current role as a coding consultant.
She recently served as the program director for Medical Coding and HIT at Eastern Gateway Community College. Dianna earned her bachelor's degree from the University of Cincinnati subsequently achieving her RHIA, CHPS, and CCS certifications. She is an AHIMA Approved ICD-10-CM/PCS Trainer and a a presenter at regional HIM meetings and the OHIMA Annual Meeting.
Posted by OHIMA at 3:00 PM No comments:


Test your ICD-10-CM seventh character for injury/external cause coding skills with this short scenario.

August has brought some interesting adversities to the Klutz children.  See for yourself.

Last winter, little Dana suffered superficial frostbite to both her hands.  She is now experiencing numbness from that injury and her pediatrician is looking into Botox injections as a potential treatment.

Meanwhile, it appears that Raymond has a nonunion of his distal tibial fracture, which occurred when he fell out of a tree last fall.  He is going to have to have surgery to correct the initially closed fracture.

Janine is continuing to go to rehab for the bilateral biceps strain she developed as a result of scrubbing floors during spring cleaning.  Janine continues to suffer from the strains caused by the repetitive circular movements she used for scrubbing.

Egon has developed a keloid scar on his palm from a laceration he got last year when he accidentally cut his right palm with a bread knife.

Peter rounds out the children’s’ issues as he is going to the wound clinic this week to get a dressing change for the second degree burn he got by reaching across the steam from a boiling tea kettle to reach for the cookie jar.  That resulted in his right wrist burn.

That’s all the lingering issues for the Klutz children…at this time!


Hello my name is Ms. Shelia Robertson and I’m your OHIMA 1st year Delegate.  I had the extreme pleasure of attending my first Leadership Conference earlier this month and where do I begin!  The Leadership Conference was more than I ever imagined. The energy and excitement of the presenters was electrifying.
AHIMA’s Transformation Story: Mission, Vision & Strategy presented by Valerie Watzlaf and Wylecia Wiggs-Harris was insightful and inspiring!  Their dedication and commitment are very encouraging to me.  One of the things I took away from their session was that, “change can happen quickly however transformation isn’t linear.”
They discussed being a Transformational Leader and likened it to petrified wood which in time becomes rock (solid).  The message was to “be centered” and support others through the change. 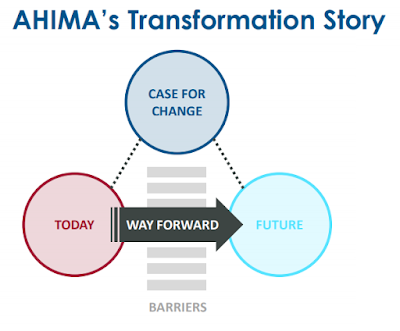 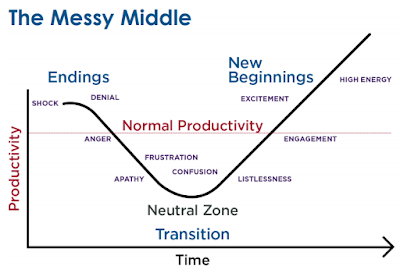 There were so many dynamic sessions and I wanted to attend them all but that was impossible.  I had a great experience in Chicago and ate some of the best food the city had to offer.  Until next time, remember in regards to leadership, “failure is an event to learn from.” 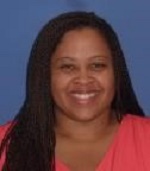 
Shelia Robertson, RHIA is the currently a 1st Year Delegate on the OHIMA FY 2020-21 Board of Directors.  Shelia is a Supervisor in the Release of Information department at University Hospitals in Cleveland, Ohio.
Posted by OHIMA at 1:55 PM No comments:

This edition of “Spotlight on CPT” presents information on coding hernia repairs.  Correctly assigning hernia repair codes requires coders to first determine what type of hernia is being repaired.  A coder must identify if the hernia is inguinal, femoral, incisional, umbilical, ventral, hiatal, etc.  Based on the type of hernia being repaired other factors may need to be considered such as:

To begin, let’s take a deeper look at inguinal hernias.  Determine the approach (open or laparoscopic) of the repair first.  Next, the age of the patient is an important consideration.  There are four age groups that a patient could fall into as noted here:

Let’s take just a minute to look at calculating the weeks for preterm infants.  Imagine that an infant was born at 35 weeks of gestational age.  Two months later he is coming in for an inguinal hernia repair.  You would take the 35 weeks and add 8 weeks (two months) to arrive at 43 weeks of postconception age.  This means the codes for this repair will be either 49491 for a reducible hernia or 49492 for an incarcerated hernia.  Now if the same preterm infant was coming in four months after birth you would take the 35 weeks of gestational age at birth and add 16 weeks (4 months) to arrive at 51 weeks postconception age.  The correct category of codes would be 49495-49596 again based on reducibility.

Once a coding professional knows the correct age group to focus on, a determination must be made as to whether this is the first repair of the hernia or if it is a recurrent repair.  Finally, coders need to identify from the provider documentation if the repair was performed on a reducible or incarcerated hernia.

A final consideration regarding inguinal hernia repairs is to know if it was considered sliding or not.  A sliding hernia is one that has a retroperitoneal organ protruding into the sac.  When sliding inguinal hernias are repaired, no matter what the age, the code to be assigned is 49525.  If a sliding hernia is described as incarcerated, coders are directed to use the codes for incarcerated hernia repair.

Coders can apply the previous method for coding other hernias as well.  Determine approach, identify initial or recurrent, and consider the reducibility of the hernia in order to assign the appropriate code. Open umbilical hernias are the only other hernia type besides open inguinal where age is a factor.

An important reminder when coding hernia repairs is that the use of mesh is considered integral to these procedures unless the hernia is incisional or ventral.  When incisional or ventral hernias are repaired with an open method using mesh, assign two codes; one for the hernia repair itself and a second (49568) which is an add-on code for the insertion of the mesh.  However, coding professionals should recognize that if an incisional hernia is repaired laparoscopically, the use of mesh is included in the code (49654 or 49655) and the add-on code should not be reported.

Now, light has been shed on coding hernia repairs.

Dianna Foley, RHIA, CHPS, CCS  is OHIMA's Coding Education Coordinator. Dianna has been an HIM professional for 20 years. She progressed through the ranks of coder, department supervisor, and department director, to her current role as a coding consultant.
She recently served as the program director for Medical Coding and HIT at Eastern Gateway Community College. Dianna earned her bachelor's degree from the University of Cincinnati subsequently achieving her RHIA, CHPS, and CCS certifications. She is an AHIMA Approved ICD-10-CM/PCS Trainer and a a presenter at regional HIM meetings and the OHIMA Annual Meeting.
Posted by OHIMA at 10:07 AM No comments: