This edition of “Spotlight on CPT” presents information on the coding for genicular nerve block(s) and ablation(s).  First things, first.  What is the genicular nerve?  This term refers to several sensory nerves that innervate the knee.  These include the femoral, common femoral, saphenous, tibial, and obturator nerves.  Blocks and ablations can reach several of these nerves and attempt to provide relief to patients with chronic pain from osteoarthritis of the knee.

Here are a few pictures of that area. 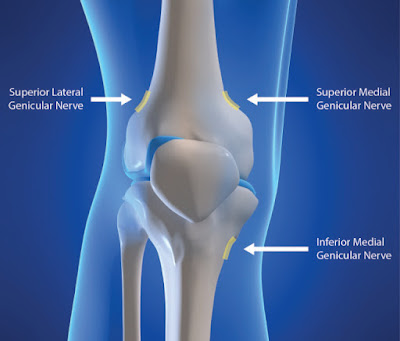 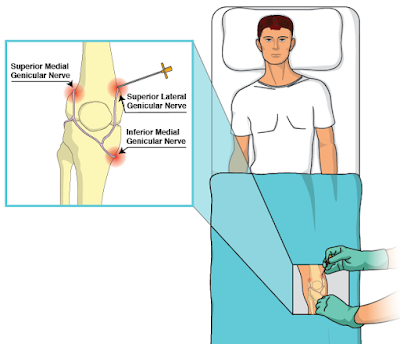 In 2020, the CPT code updates, changed the way that these procedures should be coded.  Let us explore those changes.

Previously, if a coding professional was assigning a code for a genicular nerve block, that code would have been 64450 for Injection, anesthetic agent; other peripheral nerve or branch.  There was a November 2015 CPT Assistant that instructed coders to only assign the code once for genicular nerve blocks, even if more than one nerve was injected.

With the 2020 CPT code update, there is a new code for this procedure, 64454. The code’s definition is:  Injection(s), anesthetic agent(s) and/or steroid; genicular nerve branches, including imaging guidance, when performed.  Notes that follow the code instruct that all three branches must be injected in order to assign this code.  If all three branches-superolateral, superomedial, and inferomedial are not injected, then the code must have modifier -52 assigned to indicate the reduced services.

If we turn our attention to an ablation or destruction procedure of the genicular nerve, we previously would have assigned 64640 for Destruction by neurolytic agent; other peripheral nerve or branch when coding for the genicular ablation.  A January 2018 CPT Assistant alerted coding professionals to assign the code three times if all three branches were destroyed and place modifier -59 on the second and third code.

Again, with the 2020 CPT code updates, we find a change.  Now we should assign 64624 for Destruction by neurolytic agent, genicular nerve branches including imaging guidance, when performed for the ablation/destruction of the genicular nerve(s).  The same note follows this code detailing that all three genicular nerves must be destroyed in order to assign this code, or modifier -52 will need to be appended in order to indicate the reduced service.  Therefore, the advice in the January 2018 CPT Assistant is no longer relevant.

Bear in mind that coding professionals should not be assigning both 64454 and 64624 for the same encounter.

Now, light has been shed on coding for genicular nerve blocks/ablations.

Dianna Foley, RHIA, CHPS, CCS  is OHIMA's Coding Education Coordinator. Dianna has been an HIM professional for 20 years. She progressed through the ranks of coder, department supervisor, and department director, to her current role as a coding consultant.
She recently served as the program director for Medical Coding and HIT at Eastern Gateway Community College. Dianna earned her bachelor's degree from the University of Cincinnati subsequently achieving her RHIA, CHPS, and CCS certifications. She is an AHIMA Approved ICD-10-CM/PCS Trainer and a a presenter at regional HIM meetings and the OHIMA Annual Meeting.
Posted by OHIMA at 8:30 AM