It’s Thanksgiving at the Klutz family home, a beautifully restored single-family home with a large backyard.  Today began with Mrs. Klutz silently hoping to avoid any trips to the ER, after the seemingly countless number of trips that were made there on Halloween. 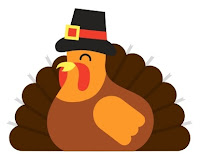 The family all piled into the car to head downtown for the Thanksgiving Day Parade in which Egon would be playing the tuba with the high school band.  All was well, until Egon, unfortunately, stepped in a hole in the middle of Main Street (the business street of town), severely twisting his left ankle.  Mr. Klutz took Egon, Mrs. Klutz grabbed the tuba, and the other four children proceeded to the car (making their own mini-parade) for the first ER trip of the day.  X-rays revealed the good news being that no bones were broken; the ankle was just badly sprained.  The doctor recommended ice and elevation of the leg along with rest.

Mr. Klutz got Egon situated on the couch with his leg propped up on the coffee table, and then went to play a game of touch football with Peter along with a few other neighborhood boys and their dads in the community park at the end of the street.  Mrs. Klutz took Janine and little Dana to the kitchen to begin preparing their Thanksgiving dinner.

Things were going smoothly until Mrs. Klutz heard the back door slam and saw Mr. Klutz burst into the kitchen.  He said that Raymond had fallen out the oak tree that he’d been climbing in the backyard, quick to add that he seemed okay, just a little hobbling, but thought it best to take him to the ER to be checked out.  Mr. Klutz’s sudden entrance startled Janine who had been lifting a large, cast iron pot of peeled potatoes to put on the stove, but instead dropped it on her right foot.  With tears welling in her eyes, Mr. Klutz hurried her to the car as well, and off to the ER he went with Janine and Peter.  Another round of x-rays concluded that Janine had a broken second metatarsal, while Raymond had a left distal tibial fracture.  An ortho boot was provided to Janine, and a splint for Raymond.  Mr. Klutz returned home with both children and placed them on the couch next to Egon.

Mrs. Klutz was still working on dinner so Mr. Klutz went to get Peter who was still playing football.  He was just in time to see Peter get tackled at the knees and go down in a slump.  (Touch football had evolved in Mr. Klutz’s absence.)  He helped his son to the car, informed Mrs. Klutz of yet another ER visit and drove off.  Peter’s x-rays showed a lateral dislocation of his right patella which the ER physician successfully manipulated back into place.  Upon his return home, Peter’s siblings made room for him on the couch, adding yet another leg to the coffee table.

Both Klutz parents kept a watchful eye on little Dana, fearful that she would somehow hurt herself, too.  But as the late afternoon wore on, little Dana remained uninjured.  Until, that is, she went to get herself a drink of water in the bathroom and dropped the glass on the tile where it shattered.  Frightened she ran (in her bare feet) over the glass to find her mother who promptly took her to the ER to have the embedded glass and small lacerations on her left foot tended.

That evening, the Klutz couch was full of children all with legs propped on the coffee table.  Mr. and Mrs. Klutz sighed and gave thanks that another day of ER visits was over…..for now!