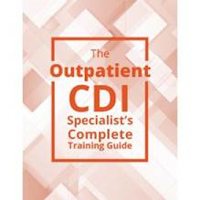 On the other hand, since the focus of outpatient CDI is distinct from inpatient CDI, some organizations determine that the inpatient and outpatient teams are better served by separate reporting structures. Such decisions can be influenced by several factors, such as clinic size, whether the physician practice is part of a larger health system, and differences in the operational structure of the physician clinics, which could be deciding factors on where the outpatient CDI team reports.

Regardless of your CDI program’s structure, outpatient CDI professionals should have clearly established duties as differentiated from the roles of others. Dual roles, mixed goals, and overwhelming task assignments can dilute the program mission and make it difficult for new CDI to acclimate to the basic duties assigned and the overarching mission of the program.

Similarly, as a new CDI professional you must bring with you past skill sets but remember that once you take on the CDI mantle, that is the role that must take precedence. Many new staff defer to their comfort level. For example, those experienced in case management or utilization review may lean on their skills in that area, focusing their record review toward their area of expertise at the expense of the CDI program’s actual mission (typically record accuracy and reimbursement).

Those with nursing or physician backgrounds may find it difficult to move from hands-on caretaking to a supportive role influencing documentation. The CDI specialist, even if he or she is a physician, is not considered part of the treating healthcare team. CDI specialists, just like coders, cannot freely interpret or add to existing documentation with assessments or evaluations of their own. Only the treating physician can diagnose the patient, since it is his or her clinical opinion that guides the treatment and care of the patient.

In short, all program reporting structures can prove effective, provided they have clearly defined roles within them. The best fit for your facility depends on the overall goals of the program, support of the facility leadership, and the ongoing evaluation, support, and effort of the CDI team, according to a July 2010 CDI Journal article, “Survey Shows Structure of Healthcare Documentation Improvement Programs.”

By 2017, the majority of inpatient programs reported to the HIM department, followed by those with their own CDI program reporting structure, according to the ACDIS CDI Salary Survey that year. As outpatient programs continue to expand, additional data will provide better illumination as to national trends for its specific reporting structure; anecdotally thus far, however, trends seem to be following the patterns of their inpatient counterparts.

Editor’s note: This is an excerpt from The Outpatient CDI Specialist’s Complete Training Guide.