Since the Klutz children are in so many activities once spring arrives, Mr. and Mrs. Klutz decided to take advantage of a cold, snowy weekend in February to get some spring-cleaning chores out of the way around their single-family home.  Each of the children had a task to help with as well, and true to course, each child ended up with some injury.  Let us see what transpired. 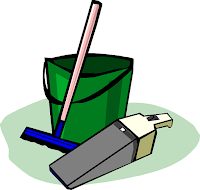 Raymond was helping his father clean out the garage by holding a large box that his father was filling with items to throw away.  Raymond had both arms under the box, which became quite heavy, but he did not want to complain, so he held the box in the same position for an hour.  By the time Raymond put the box in the dumpster, he had strained both wrists from the rather awkward position he had kept the box in.

Little Dana suffered a strain of her big toe when she fell out of a pair of her mother’s high-heeled shoes that were going to be thrown away.  Dana could not help but want to try on the fancy shoes when she was supposed to put them in the trash.  She took them to her bedroom so she could secretly wear them.  However, she misjudged how big the shoes were and walked into a dresser in her bedroom and then fell, injuring her left toe.

Egon carried boxes of old clothes to the attic for his mother making multiple trips up the ladder and lifting the heavy boxes overhead.  He ended up with a right shoulder strain by the end of the day.
Janine was pitching in by scrubbing and then waxing the floors in the kitchen and both bathrooms.  For several hours, she was busily scrubbing and waxing using the circular motions her mother had taught her.  By late afternoon when she was finished, it was evident that she strained both of her biceps from the day’s work.

Peter’s contribution to the spring cleaning day was vacuuming all the carpets and rugs in the house, including the bedrooms, living room, dining room, and family room.  This took several hours as he moved the furniture to sweep behind and/or under it.  The constant reaching and repetitive movement took its toll on his low back, which ended up strained by day’s end.

The Klutz children were all glad when the annual spring-cleaning was finished…for this year!