Endoleaks.  What are they?  Why do they occur?  How are they coded?  In this “In the kNOW” installment, we’ll answer these questions.

First, an endoleak happens after an endovascular aneurysm repair (EVAR).  With this condition, blood is found to leak back into the aneurysmal sac which creates a build-up of pressure within the sac.  Endoleaks can occur for a variety of different reasons, and in fact, there are five different types of endoleaks which are differentiated by their point of origin.  Let’s begin our conversation with an understanding of the original procedure, the EVAR. 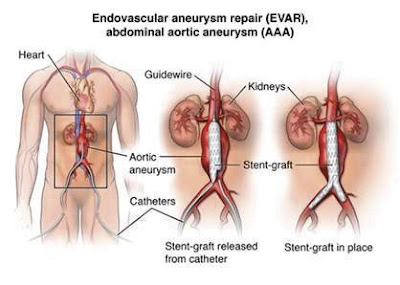 When a leak occurs, which is not uncommon, it may be due to one of several reasons.  Endoleaks have been grouped into five types, with a few of these types having additional subdivisions.  Let’s begin with discussion of a Type I leak.

Type I leaks may be further characterized as Type Ia (early) or Type Ib (late).  These are leaks at the areas of attachment.  With Type Ia, the leak is at the proximal graft attachment, whereas with Type Ib leaks occur at the distal graft attachment.  This could be the result of graft migration creating a gap between the graft itself and the vessel wall.  Type Ia may result from an inadequate graft size; Type Ib is generally caused by dilation of the vessel.  When assigning an ICD-10-CM diagnosis code for type I endoleaks, the code will depend on the subdivision if known.  For Type Ia or a Type I that is unspecified assign T82.310A for Breakdown (mechanical) of aortic (bifurcation) graft (replacement), initial encounter.  When a Type Ib is identified, code T82.898A for Other specified complication of vascular prosthetic devices, implants, and grafts, initial encounter. 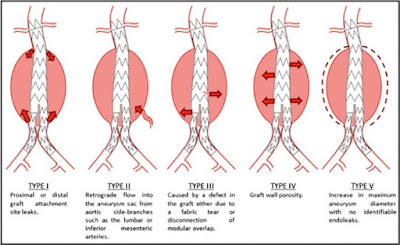 Source: https://www.sciencedirect.com/science/article/pii/S0378603X17300700
Type II endoleaks are the result of retrograde blood flow into the aneurysmal sac from collateral vessels or side-branches and are again subdivided into Type IIa and Type IIb.  With a Type IIa leak, a single vessel is involved, and if it is a Type IIb leak, there are two or more vessels which are found to have blood flow into the aneurysmal sac.  This specific type of leak is not a mechanical breakdown of the graft itself, so the appropriate ICD-10-CM coding for a Type II leak (either IIa or IIb) is I97.89 for Other postprocedural complications and disorders of the circulatory system, not elsewhere classified.

Type III endoleaks, again subdivided into Type IIIa or IIIb, are the result of problem with the graft.   Type IIIa leaks occur when the components (think graft extension) of the graft become separated or misaligned.  In Type IIIb, the graft has a defect or hole which is the source of the leak.  These leaks are classified just as Type Ia or Type I unspecified leaks to a mechanical breakdown of the graft, so code T82.310A is correct for type III endoleaks.

A Type IV endoleak is seen when there is porosity through the graft walls themselves thus allowing blood to ooze through the walls of the graft.  As the material used to create stent grafts has improved over time, this type of endoleak occurs less often.  However, if a Type IV endoleak is identified it is assigned to T82.330A for Leakage of aortic (bifurcation) graft (replacement), initial encounter.
The final type of endoleak is a Type V which captures endoleaks where the mechanism of the leak is unknown.  Coding professionals may see this documented as endotension.  The appropriate ICD-10-CM code for Type V endoleaks is T82.390A, Other mechanical complication of aortic (bifurcation) graft (replacement), initial encounter.
Could it be possible that more than one of these codes would be used during the same treatment encounter?  Yes.  A patient could have a Type Ia endoleak of the right iliac limb and a Type IV endoleak of the left iliac limb.  If so, two codes would be necessary to capture both endoleaks; T82.310A for the Type Ia and T82.330A for the Type IV.
When physicians treat endoleaks by inserting additional stent grafts to cover and seal the leak(s), Revision would be the appropriate ICD-10-PCS root operation.  Revision is correct since the definition is correcting, to the extent possible, a portion of a malfunctioning device or the position of a displaced device.
Now you are In the kNOW!!

Dianna Foley, RHIA, CHPS, CCS  is OHIMA's Coding Education Coordinator. Dianna has been an HIM professional for 20 years. She progressed through the ranks of coder, department supervisor, and department director, to her current role as a coding consultant.
She recently served as the program director for Medical Coding and HIT at Eastern Gateway Community College. Dianna earned her bachelor's degree from the University of Cincinnati subsequently achieving her RHIA, CHPS, and CCS certifications. She is an AHIMA Approved ICD-10-CM/PCS Trainer and a a presenter at regional HIM meetings and the OHIMA Annual Meeting.
By OHIMA at May 10, 2021