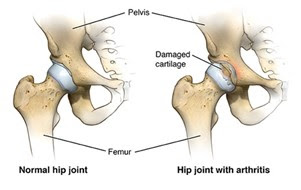 Total hip replacements address both the femoral and acetabular components, with the femoral head being excised, the area cleared of any bony protrusions (osteophytes), and the acetabulum reamed out prior to the replacement insertion.  In this process, a stem is inserted in the femoral shaft, the ball fits onto the stem, and then a cup is inserted in the acetabular socket.  Stems and cups are metal, with the ball either metal or ceramic.  Cups are also fitted with liners which may be plastic or ceramic.  Cement may or may not be used in the replacement process.  Total hip replacements are coded in CPT to 27130. 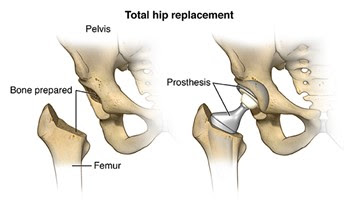 If a partial hip replacement is undertaken, a coding professional may see evidence of only a femoral stem being inserted, or a bipolar arthroplasty where the stem and cup are inserted without a ball.  This procedure yields a CPT code of 27125.

It is not uncommon for hip replacements to need revisions.  Many hip placements last between 15-20 years, but do suffer wear and tear.  Revision codes are determined by which component is being replaced.  If both components are addressed the code is 27134.  If only the acetabular component is revised, assign 27137, or if it is just the femoral component use 27138.

Hip replacements may also become dislocated.  There are two specific CPT codes for closed treatment of post hip arthroplasty dislocations.  The difference between the codes is whether or not anesthesia was used during the treatment.  CPT code 27265 is assigned when no anesthesia is utilized; CPT code 27266 is with anesthesia, which means either general or regional anesthesia.

Now, light has been shed on coding for hip replacement.